The suicide attack in Pulwama, which killed 40 brave soldiers of the soil has been a blow not only to families of the slain but also to the entire nation. The attack not only killed 40 Indian Central Reserve Police Force (CRPF) personnel but also several civilians were also injured. As the nation rush to help the families of the slain soldiers some anti-social elements are merely seeing this as an opportunity for making easy money. This is yet another one of those instances where the reach, power and influence of the social media can easily be misused to rob people of their money in the name of welfare funds for the Pulwama martyrs. Several such messages have been spotted on social media platforms such as Whatsapp, Facebook, etc. 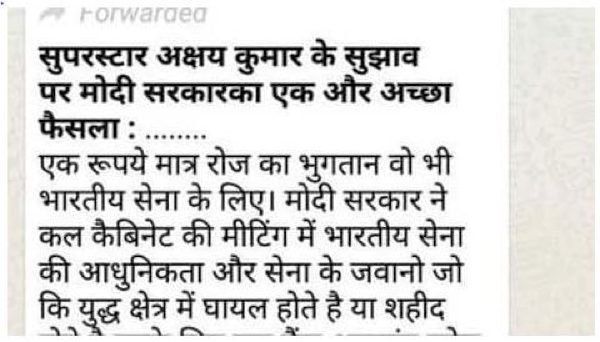 This message is being forwarded on Whatsapp and claims that the Modi Government has started a new scheme ‘The Indian Army Battle Casualties and Weapon Purchase’ to help the soldiers and their families. Not only this message uses the reach of the Whats App but also tries to establish its authenticity using the names of Mr. Modi and Akshay Kumar. Easy to believe as Mr. Kumar has been spotted with Mr. Modi several times. The message also contains the bank account number where donations can be made.

According to Whatsapp messenger’s new policy a single message can only be forwarded 5 times by a single person. This is an attempt from Whatsapp team to try and control the fake news on its platform. So, it is safe to assume that this scam is being run by more than one people which makes it hard to trace it back to the original perpetrator.

The message is partly true as such a scheme does exist and its name is ‘Army Battle Casualties Welfare Fund’ but it is not for the CRPF martyrs of Pulwama attack. Maybe the scammers are trying to confuse the donors between the fake and the original fund scheme.

Such a tactic was used a few years ago in a fake BSNL recruitment case when the scammers created an identical website with URL bsnll.co.in whereas the authentic website’s URL is bsnl.co.in. People lost lakhs of rupees in this recruitment scam. 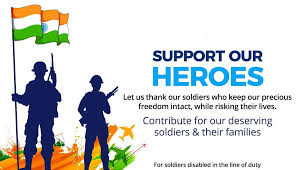 For people who want to honor the sacrifice of the soldiers died in Pulwama attack can surely make donations but through Paytm App or website. Under the donation tab on Paytm website there is a payment feature by the name -- 'CRPF Wives Welfare Association' -- which can be used to make the legit donations. On Paytm App people can use the link -- 'CRPF Bravehearts' -- to make their donations count. Both links are operational until March 10, 2019. To make the donation users will require to enter their name, PAN number and amount they wish to donate. Payment can be made through debit cards,Paytm wallet, credit card, UPI, net banking, etc.

You can also make the donations on ‘Bharat Ke Veer’ website. Earlier the website had crashed due to large traffic but is up and running now.

The suicide attack in Pulwama, which killed 40 brave soldiers of the soil has been a blow not only to families of the slain but also to the entire nation. The attack not only killed 40 Indian Central...

Kerala floods: Learn how you can help

The water levels in Kerala have started to recede but the state is far from recovering from the shock and calamity that nature has struck them with. The calamity has displaced millions of people and c...

Politics is often characterized by the strong likes, hard decisions, and even stronger dislikes and is, therefore, a double-edged sword, even for the best of the politicians. The actions of the mini...