Since last few days, a news about passing the GATE exam on a compulsory basis is floating not only on social media but has been published in major newspapers as well. This has caused a great panic among the students as studying engineering is a challenge in itself and now just the thought of writing an exit exam to get their degree in hands is just unfair, no matter how any higher authority justifies it. Luckily, the new floating around is simply a fake and the purpose of the news is just to create an atmosphere of tension among the students and to agitate them and force them on streets for protests and rallies. 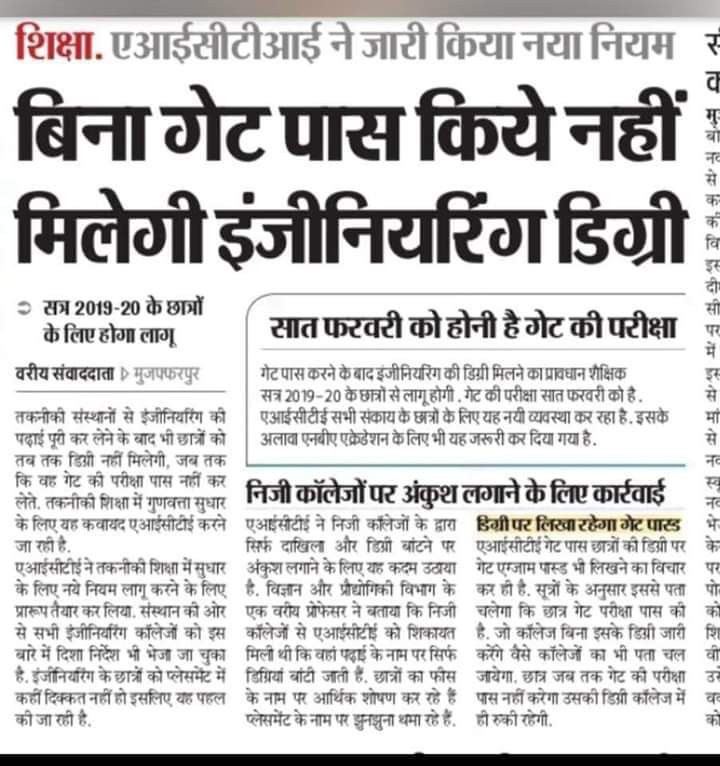 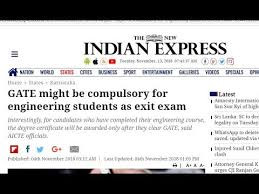 The News includes that the decision was taken at a meeting held at New Delhi in order to control the number of unemployed engineers which are being produced by the colleges every year. Students who are currently pursuing their engineering will have to write the GATE exam and those who already have their engineering degrees will be required to appear for the GATE exam.

“The degree certificate will be awarded to students only after they clear the exit examination,” said an official source at AICTE.

Prof Jagannath Reddy, Registrar of Visvesvaraya Technological University, said, “We have yet to receive a communication about it. Once we are notified, an official circular at the university level will be issued.”

AICTE has received mixed reviews from the teachers’ committee on the new decision and students community is angry over the new decision as for them it is a whole new level of hard work which they will have to deal with alongside the immense pressure of engineering studies. “If someone does not get employed even after completing the course then it an individual problem and not a general one. I don’t understand why the AICTE is generalizing this,” questions a student.

“This is really a good move and I hope this will increase the chances of engineering graduates getting employment,” said a principal of a private engineering college in the city.

Dr. Manjunatha B, Principal of New Horizon College of Engineering, said, “It depends on individual skill and instead of conducting an exit exam, it is better for colleges to conduct an aptitude test, a technology test or communication skills test at least once each semester.”

Despite the news going viral and being published by the newspaper has no substance in it as it has been clarified by the AICTE that the body has taken no such decision and the news are just rumors. The notice was issued by the Prof. M.P. Poonia, vice-chairman of AICTE. The notice was issued in the interest of all the stakeholders including the students. Below is the image of the original notification posted by the AICTE on their website. 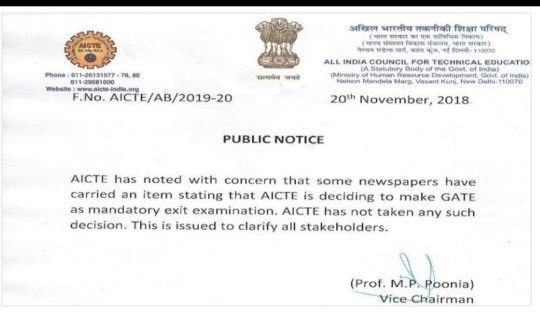 Now that it has been officially confirmed by the AICTE that they have not placed any such criteria on the engineering degrees, students can go ahead and concentrate on their studies and exams as usual.

Since last few days, a news about passing the GATE exam on a compulsory basis is floating not only on social media but has been published in major newspapers as well. This has caused a great panic amo...

Women are a crucial part of any society and yet they are still the most vulnerable one. Not a single day goes by when we don’t come across the headlines of molestation, eve-teasing, rape, sexual assau...

Get Inspired ! Learn How to rule life from Inspirational Entrepreneur and Teacher

We as humans, are social creatures. Outwardly we all may have different goals in life but the essence behind each and every goal of ours is the desire to achieve success and for this, we seek inspir...

How to write an essay and search content for it?

Writing a compelling essay is not less than making a hamburger. Just consider the introduction and conclusion part as a bun, with the juicy meat of your arguments in between. Well, the introduction pa...

Importance of Technological Tools in Education

Base on the argument by technologists, investors, education experts, and futurists, it is clear that technology is a fundamental entity in the 21st century because of the forecasted list of its use in...

<p>Akash is Social Media Expert and loves to write on different Topics.</p>